The Obstacle of Selling Art

Recently I spoke with a woman deeply involved in the business of art, galleries and the commercial side of our passion.  She was articulate about what it would mean to point oneself toward gallery representation, which includes having a consistent body of work to show.  She mentioned that my present website, which at the time was populated with work I've done over the past 15 or so years in varying styles, was a mish mash of things and not the best way to display my work.  I have to agree, somewhat grudgingly,  and in fact have grown tired of many of my experiments of the past.   Perhaps they need to be organized in a different way as one thing certainly leads into another as I have worked over the years.

What to do with all those pieces I did earlier:  encrusted pieces and mosaics.  Perhaps demolition?  A friend of mine from the distant past said he had burned all his paintings after he left the clinic he'd gone to after his breakdown.  He often exulted about "the big bon" as he called the bonfire of his paintings.  Unfortunately he was mentally ill.    I'm afraid I might not go that far, but perhaps a huge trip or two to the goodwill or a dumpster might be a good idea for some of the things I've done in earlier years.  Maybe a flat pit in the yard which archaeologists can find some future time.  It's all impermanent.

About a year ago, or perhaps almost 2 years ago, I first got a book out of the library with the work of the 15th century painter, Jan Van Eyk.  When I checked the book out it was brand new, and when I took it back it was quite used as I had read it, reread it and turned the pages so many times.  I then began to develop a strong interest in Renaissance art and techniques of painting developed by Van Eyk and later painters.  My second obsession was Edward Hopper, as I believe his work embodies many of the same qualities I am interested in.  Also I know he was deeply influenced by many of the 19th century European painters.

Edward Hopper said somewhere that he just paints, with no funny stuff.  That phrase really hit home with me as I have gone through so many layers of "technique" and all sorts of funny stuff:  dropping glass beads into wet paint, dropping shavings of pastels into the paint, collage, encaustic, finally gluing globs of paint onto the canvas and later pieces of glass, all of which was interesting to me at the time but limiting to the creation of a really simple and complete work of art.

I believe I came back the other way after doing large mosaics over paintings and the like when I made this piece:  Sunday Morning: 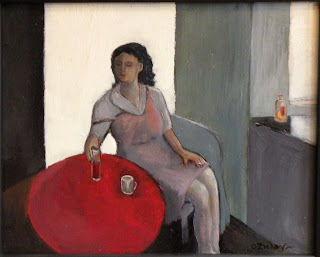 This piece was inspired from a photo of a young woman sitting at a table which I found in a magazine at the Goodwill.  Having sketched from that I arrived at this which I believe has transcended my intent. The painting is no longer "mine".

Back to the selling of art.  This piece and the ones like it which I have spent a lot of time on are nothing I want to take to a restaurant or even a gallery and offer for a price.  I feel there are many people besides me out there who feel as I do, people who don't really believe that the making of art is to make things to sell.  Rather it is something that has to be done in order to satisfy a deep need.  I saw John Le Carre's "last interview" recently and admired what he said, that art is your life and to achieve it you have to be sort of meditative and let it live within you.  He said that some other writers he knows are very witty and use up their creativity in that way rather than holding it and then using it in his art.  Surely the fascinating characters he summons from his own mind can come no other way.

I have entered juried shows.  I like them as they give me the feeling that my work resonates at least with someone else, but also like the lack of pressure there is in entering them.  I may continue the route of juried shows, and intend to just paint for a while.  I have given away all my glass I was using for large mosaic pieces to an arts center and don't miss it.   For me there is been a terrible self-consciousness that appears when I feel I am making something to be completed by a certain time, or for a show.  Far better to let things take their course.  Let everyone have their 15 minutes of fame, and be happy in it.  I would never aim for that.


COPYRIGHT: All paintings, pictures and essays in this blog are the property of Christine Zachary. Reproduction or retransmission of these materials in whole or in part, in any manner, without prior written consent, is a violation of copyright law.
at June 26, 2011

oil on gessoed plywood, 26 x 26" April 2019 COPYRIGHT: All paintings, pictures and essays in this blog are the property of ...