I have again become interested in plain and simple painting.  After years of abstracting, experimentation and so on I'm back to the basics of composition, color and all the elements that create a work of art in a simple way.

My most recent pieces have been of city landscapes.  I just worked on a large piece of several buildings on a road and find that no matter what the piece is, that the same sorts of things happen, that it is a great struggle to find balance, color harmony, and finally to allow the original inspiration come through.

I struggled and struggled to get it and finally it's in a state (not complete, how could it ever be) where I'm leaving it alone.  I had a sort of emotional exhaustion afterward, but today started yet another landscape which involves several houses, the Columbia river and the far shore.  Again, it is that same dance between colors, shapes, lines, angles, and feeling.  I don't know how the plien air people do it.  I really don't know how one can choose the "right" color in just a day.

I was reading about Leonardo and the Mona Lisa, that he took it with him for several years and must have worked on it during those times.  I quote from his Treatise on Painting:

"There are men who are discoverers and intermediaries and interpreters between Nature and Man, rather than boasters and declaimers of other people's work, and these must be admired and esteemed as the object in front of a mirror in comparison to the image seen in the mirror. The first is a real object in and of itself, the second is nothing. These people owe nothing to Nature; it is only good fortune that they wear a human form and, if it weren't for this good fortune, I'd classify them with the cattle and the animals.
There are many who would, with reason, blame me by pointing out that my proofs are contrary to established authority, which is, after all, held in great reverence by their inexperienced minds. They do not realize that my works arise from unadulterated and simple experience, which is the one true mistress, the one true muse. The rules of experience are all that is needed to discern the true from the false; experience is what helps all men to look temperately for the possible, rather than cloaking oneself in ignorance, which can result in no good thing, so that, in the end, one abandons oneself to despair and melancholy.


These are interesting words.  I believe that what he means by "experience" points to several things, not only the scientific method by which he examined the properties of light, shade, perspective and so on, but also the inner wisdom which he imparts in such a remarkable way to his masterpiece the Mona Lisa.  That the expression shown through her eyes must surely be the inner light of his own, as after all, we all ultimately paint ourselves and our own inner and outer experience.

Thus to think that a painting must have an overt message brings it to a lower level.  My husband Chris was talking of poetry and said that poetry is written because it can't be expressed any other way, and the same goes with painting.  If you can explain the meaning of a piece, then why bother?

In my last piece I have painted a large rather run down wood home which is built on a rise up from the Columbia River.  It's on the main drag  going into a lumber town, and next to it are several other buildings which have all become businesses.  I was struck by the look of the house and actually made a second trip to Astoria to photograph the houses next door.  There was the frame of what must have been a sign up on the berm, and I originally put it in, thinking that would indicate some extra meaning in the picture, but in the last repaint I removed the sign as I wasn't necessarily wanting to make some statement which involved that.  The piece had taken on a life of its own and I now look at it like a visitor as well.

I think that a piece of true poetry takes on a life of its own beyond the intention of the artist.
at March 25, 2010 No comments:

I guess going to my studio every single day and working an average of 3 hours or more has begun to pay off.  Recently I was notified by two shows that I have gotten juried entries accepted.  One took 2 of my 3 entries and the other took 3 of my 3 entries.

As I can be so hard on myself and my own work, constantly critiquing it and trying to improve it, this encouragement is well appreciated.  These are the 3 pieces accepted in one of the shows:
titles are GOING DIFFERENT WAYS, NORTHWEST FARM AND DAY AT THE BEACH 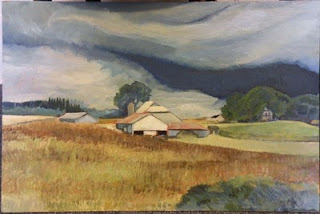 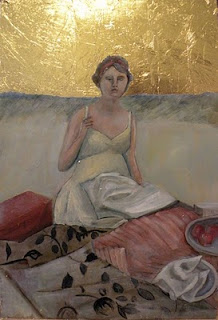 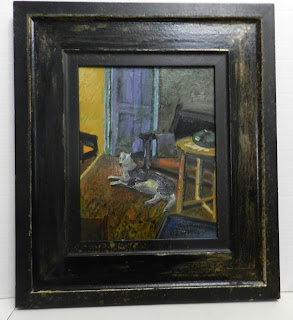