Comments on Cezanne and "The Unknown Masterpiece"

Of the many artists I love and have tried to learn from, Cezanne has been my lifelong companion.  I still have a rather vivid recollection of sitting in a college cafeteria looking through a book of Cezanne's paintings back in the 60s, and being so impressed and stunned, especially by the still lifes, for their "je ne sais quois".   Since that time I have turned again and again back to Cezanne for inspiration and guidance.  In recent years I have also read a lot about him, including Rewald's biography and now have found what I think is the most illuminating of all biographies, done by Alex Danchev.  Previous accounts speak of the break between Emile Zola and Cezanne, who until Zola wrote the novel, L'ouvre, about a painter who never achieves "greatness" and finally hangs himself, were very close.  The previous accounts point out the fact that Cezanne never spoke to Zola again after he read the book.

This biography by Danchev gives what I think is a different view of the growth of artists, and what I get from it is that Zola went more the way of Cezanne's veiled opinion of Wagner, and perhaps other artists who have to sell themselves and be "showy".  Cezanne was financially independent and able to continue to "serve his muse" which is many times far different from the huge financial success and fame some artists gain at the expense of selling their souls and never achieving what is within themselves.  Remember Faust.   An interesting movie take on all this is "Basquiat" or another a less known movie called "Untitled".

What I mean to get at here is that perhaps the split between Zola and Cezanne was only natural, as really, Zola remains to my eye a kind of second rate artist who made a good living by his writing.  While at the same time Cezanne did not seek fame or fortune in his painting but remained always self-critical, often to the point of great neurosis, and he was always searching to go further and further in his own personal quest.  He was brilliant, a classicist, could converse in Latin, and always the top of his class until he failed in law as he hated it.  One of his favorite stories was by Balzac, "The Unknown Masterpiece" which tells of an artist who keeps seeking to portray "life" in his work and the final result is a surprise.  I recommend this story.

As this blog is about painting and art, I want to share my point of view that what you do and the direction you take as an artist might not fit in with money or fame.  If you are true to yourself, perhaps you (or I) will eventually create an unknown masterpiece, and even if it remains unknown, it is known by you.  You know that you have achieved it.  When I look at what passes for art and the people who are successes these days, especially the world of big media events, this resonates with me.   In such a way, Cezanne told someone, "I'm the greatest artist of my time" and I think he meant he had achieved something he knew was "more real than real" a touch of the divine as he strove toward his own personal perfection.  And that does not need to be touted, you just know in your heart that you have achieved something.


COPYRIGHT: All paintings, pictures and essays in this blog are the property of Christine Zachary. Reproduction or retransmission of these materials in whole or in part, in any manner, without prior written consent, is a violation of copyright law.
Posted by Christine Zachary at 11:23 AM No comments: 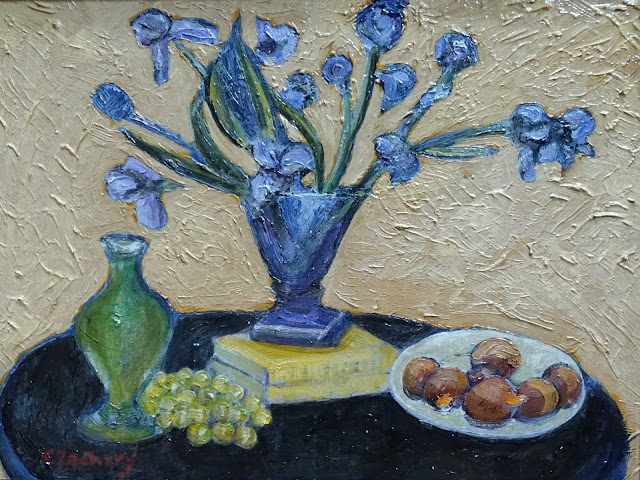 COPYRIGHT: All paintings, pictures and essays in this blog are the property of Christine Zachary. Reproduction or retransmission of these materials in whole or in part, in any manner, without prior written consent, is a violation of copyright law.
Posted by Christine Zachary at 1:28 PM No comments: