Malaise of the artist, and most of us are uneasy --- with the exception perhaps of politicians

I will share this with you, ----often I have a malaise which doesn't come from any one thing.

Would I feel any less malaise if I won the lottery, or became famous as an artist, or was instantly younger and absolutely perfect in every way? Probably not. I suppose blonde beauties have just as much malaise as aging bohemians.

I mentioned this to Chris as we often drive downtown and when I look at people's faces I see they are not happy in general. They want more, they have the malaise. Chris said, "Everyone feels a malaise about life, because life doesn't make any sense."

"Life doesn't make any sense." Rather a simple way to put the fact that things all over the planet are a mess in so many respects. The US in shambles financially and morally.   And then on a personal level we all make these irrevocable decisions as to the direction of our lives, then suddenly switch courses or regret things later.

And yet we go on. Some time ago I got a rejection from something I feel was unfair and due to "politics as usual"  in a closed group  I was saddened over it, but then realized that I must simply be true to myself and go on. As an artist, it is an important decision just to go on and be true to your inner voice. Sometimes that poor little voice gets lost in all the grandiose schemes of the ego, wanting so much, understanding so little of the real nature of things.

Another really important question to ask yourself as an artist is the motivation for what you are doing.  It is a very simple question:  "What is your motivation?"  but sometimes the answer is not so simple.  Is it to make money, gain fame, or satisfy something else within yourself?  I will perhaps write another post on this in the near future as it's a question I believe I'd like to explore in words.  But for now the comment about Glenn Gould must suffice:
Glenn Gould said something to the effect that the artist should be able to operate in secret and not be dependent on the demands of the marketplace, and furthermore if the artist is able to do this, he/she will abandon a false sense of responsibility toward a public. He mentions this and also says that ideally the artist should be able to work unaware of what other people are doing!

INCIDENT - OIL ON BOARD 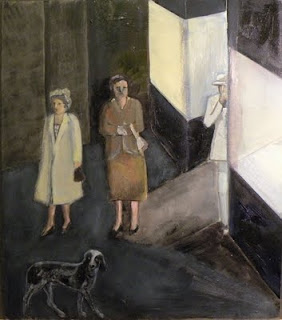 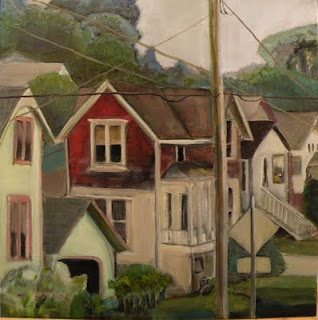 oil on gessoed plywood, 26 x 26" April 2019 COPYRIGHT: All paintings, pictures and essays in this blog are the property of ...