Our friend, distinguished writer from Brazil, Rogel Samuel, responded to my last entry on the blog and quoted from Villa Lobos, translated here by Chris:

"My art is like letters to the future
from which I am expecting no response."

I am back to the motivation for doing art and comments about it.

In some sense, I think every person is an artist, at least latently.  I have seen works of all sorts done by different people, but not all put the badge of "artist" upon themselves.

For me, I was always drawn to the process of creating.  My grandmother taught me to crochet and knit when I was about 5, and I made my first cable knit sweater when I was in the 3rd grade.  It was pretty ugly, but I made it!  For Christmas I always loved all the craft kits:  woodburning, weaving, beading, number painting, anything that was available in that era.  Also, I took art classes at the home of Miss Mary Kirk who was then the art teacher at the Lima Ohio high school.  Miss Kirk lived with her mother in her family home, a large Victorian house covered with dust.  She had made the front room into a kind of art studio, and a small group of girls would come on Saturday mornings.  I remember being dropped off at her house and knocking.  I was always at least 30 minutes early, and she never let me in until 9:30 when the class started.  Often I was on the porch shivering in the winter weather.

Miss Kirk's classes always consisted of a "project" she had thought out for us to do.  We did many different things over the years I went.  Miss Kirk used a ruler and marked our names & height along with the date on the wall of the house.  Her huge cat "Tom" for whom she boiled foul smelling kidneys on Saturdays lived on, as did her ancient mother, always in a chair in the corner under a huge trailing hoya plant covering the window with long vines and blossoms that smelled like chocolate.  The dusty living room was filled with mementos of Miss Kirk's Attorney father, I especially liked her alabaster model of the Taj Mahal.  How I enjoyed making puppets, learning perspective, my first painting, marbleized paper, so many interesting projects.

But I digress --- however it is only to tell you how I have loved to make things all my life. Knitting, embroidery, art, sewing.

My husband Christopher is a pianist but never had a large career.  He is a modest, retiring man and the idea of trying to break into a world filled with competition was something he avoided.   For many years I couldn't understand this, but as I look back I realize that there are very few people able to scale the heights of a Richter or Dinu Lipati.

This relates to me and what I do, as I spent many years very bitter over the fact that people I perceived as far inferior to him artistically seemed to have all sorts of engagements and publicity.  I felt that this world was like almost every world where there were people vying for "the job."  Does it matter what?   It seemed to me that it was almost a rule that those who fell more into the category of mediocre seemed to take the time to succeed by networking or other means sometimes less attractive to mention.

Now back to me.  I started painting in earnest again after a terrible trauma in our life together.  So that trauma was really a blessing, though we didn't see it that way at the time.  We had lost our house and almost all the money we had.  I had a small antique shop which hardly paid for itself, and Chris had several jobs accompanying and playing at two churches.  He played at a catholic church and they paid him $100 a month.  He was let go as a new music director came in and brought his own musicians, and we were devastated at the loss of $100 a month!!

During that time, my father's oldest sister died.  I hardly knew her, but she had never married.  She left her estate to all the nieces and nephews.  One day I received a check in the mail for $328, my share of the inheritance from Aunt Irene.  I decided to buy paints, as all my art supplies of years past had been given away or lost, so went to a store and bought boxes of Winsor & Newton oils, some good brushes, gesso and masonite boards.  I then began to paint in our terrible rental house near my antique shop as much as I could.  I painted only one shape and size, a 16 x 16 inch square, at that time.  I painted with the impressionists, the fauves, Bonnard in mind when I started.  Chagall, Kandinsky came later.

None of the people I knew realized that I did painting at all, and if they came over and saw all the paintings on the tops of the moldings of the  house, they somehow did not attribute them to me.  Only one woman who was Chris' piano student watched my progress.  It was at that time that I began to realize that painting always took on a life of its own, that you had to let go and at the same time let a part of you oversee what was occurring.

Back to the reason I am writing this post:  as a child and later when I began doing art again it was because I had to, there was something driving me to do it and a relief felt when I managed to contact something within myself which seemed to be revealed by doing the art.

Now I jump to 2010.  I spent the last ten years in a downtown studio on the fifth floor of a rather obscure building where no one ever came except to receptions I invited people to.  Parking was horrible and expensive, but I trekked down there for the opportunity to be able to leave the junk out and in a mess if I wanted, to experiment, and to spend hours in total silence except for the traffic noise.  My surroundings were the brick walls of the adjacent buildings and the somewhat bad light.

In that time I produced scores of pieces in a variety of styles, from pointillist to fauve, and if I didn't like them I scraped them down and used the scrapings on something else.  Again, my motivation was simply to paint and see what emerged.  I went through a period of "encrusted" paintings, and then into collage with glass and other objects.  Most recently I have reverted to pure painting, inspired by the work of Edward Hopper and Jan Van Eyck.  I checked a book out of the library on Jan Van Eyck.  When I checked it out, it was like new, and when I returned it it was extremely used, as I had gone through it so many times!

Selling.  In the past couple of years I made the acquaintance of the only other artist in the building who does commission paintings of pets.  Her work is skilful, but I think her influence was counter to my view of things as her main interest was "that will sell."  To me the selling part isn't the thing.  I remember the first show I had at the studio downtown in which I sold a number of pieces.  Afterward, I started working and thinking to myself,  "This will sell."  and it was a total failure which I lost interest in completely.

Yes, it would be nice to sell.  I will not do any more mosaics until I sell one of my big ones, and who knows, that may be never!  But maybe I'm satisfied to have made my two large mosaics at least for now.   There is no room for any more, and I have no yearning for a huge space to churn out commercial commissions.

I have moved to the new studio now, a space I'm still taking on as my own.  I feel that some sort of freedom is going to emerge in my work now that I have realized that my motivation cannot be commercial.

So, back to people like me, there must be a lot of people who are creative in whatever they do: the point is to do what you love in this life.  If you play the piano, you can at least play for friends and locally.  Frankly I am very very glad that Christopher didn't get a big career, where we would have to stay with strangers we would never know well, eat in restaurants we didn't like and have to fly.  No that would be a horrible life indeed.  No amount of applause would make it right.  And for me, I have realized that I have the freedom to do what I want.

tonight, 11 pm, Chris plays Rachmaninoff and all is at peace 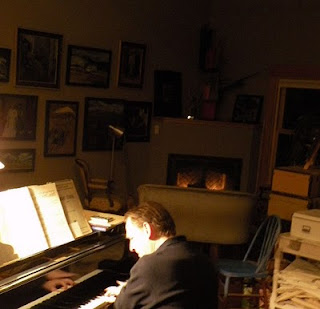